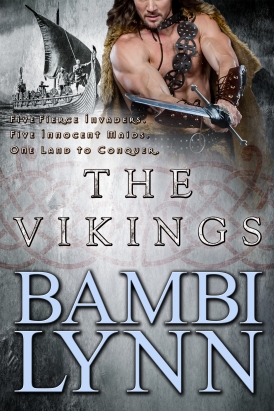 He smirked at Wulf, a silent promise that he was now indebted to him. No doubt, Wulf did not need reminding. “Well, do not just stand there,” Bron said. He reached out and, taking her by the arm, pulled her across the threshold.

For more information on Bambi and her books, click here.

THE VIKINGS OF NORMANDY

When the Viking leader, Rollo, sets his sights on conquering Paris, he sends a band of his fiercest warriors to capture a stronghold to shelter the invaders through the winter. Collect all five episodes in one volume.

Gunnar Sigurdsen finds an unguarded stronghold at the mouth of the Seine River is the perfect target. Oliana du Fossé waits helplessly for her brute of a husband to claim her.

Wulf contemplates his share of the spoils after capturing a stronghold in Francia, fat with treasure and slaves. Farin longs to escape her fate as bed slave to the most savage barbarian of them all.

Brondulf Adilson has struck terror into his enemies for as long as he can remember, as well as the women who share his bed. Now he finds himself saddled with a beauty who may just steal his heart.

Thorleif Rolvsson has been captured by the enemy. The Queen of the Franks has needs. Will a single night of passion change his fate? Or will he dine with his sons in Valhalla?

Magnus hasn’t the time or motivation to take a wife. Especially not one who will most likely try to slit his throat while he sleeps.

Don’t forget to check in on Gui on Bambi’s blog today www.bambilynnblog.wordpress.com