Today I’m delighted to welcome Ashley York to the blog.  She’s sharing an excerpt from her book Curse of the Healer with us. 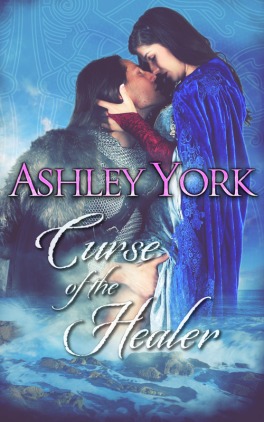 The words stung, thrown at her like a venomous curse. She cared for Lorccán as if he were her own and would never do anything to hurt him. Squaring her shoulders, she refused to show her inner turmoil.

“The lad learned his lesson.” She spat the words right back at him.

“Ye said yerself he’d be doing it again.” Despite the even keel of his voice, his increasing anger was unmistakable. “Or am I so old and feeble that my hearing is failing me?”

After the death of Brian Boru in 1014, a legend arose of a healer so great she could raise a man from the dead, with a power so strong it could make any warrior the next high king of Éire…and to steal it away from her, he need only possess her.

Fated to be a healer…

Aednat has spent her entire life training to be the great healer, knowing she must remain alone. When she meets Diarmuid, the intense attraction she feels toward him shakes her resolve to believe in such a legend. If she gives in to the passion he ignites in her, can she settle for being less?

Destined to be his…

Diarmuid of Clonascra is renowned for his bravery in battle. Only one thing daunts him: the prospect of taking a wife. The safest course would be to keep his distance from Aednat, the bold, headstrong healer who’s far too tempting for his peace of mind. But his overking orders him to protect her from a group of craven warriors intent on kidnapping her to steal her power.

What starts as duty for Diarmuid quickly transforms into something more. Aednat’s power might be at risk, but so is his closed-off heart.

If that has grabbed your attention you can get hold of a copy here.

Follow the excerpt next Monday on Cathy MacRae’s blog and once you’ve finished here, head over to Ashley’s blog to see what Roger and Lucy are getting up up this week.