Welcome to another Medieval Monday.  This week I have Ruth A. Casie with me to share her first encounter from The Guardian’s Witch. 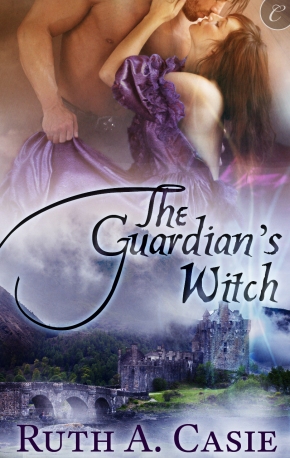 “She’s no different than her mother, rest her soul. She too was a gifted healer. That doesn’t make either of them witches. Didn’t Lady Darla help you when you broke your arm so badly everyone thought it had to be cut off?”

Alex could feel the anger rolling off Bryce but he couldn’t dwell on it. He knew more than saw his close friend flex the fist of his sword arm. A sudden pinch of pain and he stiffened himself for another surge of agony.

Ann hovered over him. “His fever worsens. He’ll not last the night.”

Lord Alex Stelton can’t resist a challenge, especially one with a prize like this: protect a castle on the Scottish border for a year, and it’s his. Desperate for land of his own, he’ll do anything to win the estate—even enter a proxy marriage to Lady Lisbeth Reynolds, the rumored witch who lives there.

Feared and scorned for her second sight, Lisbeth swore she’d never marry, but she is drawn to the handsome, confident Alex. She sees great love with him but fears what he would think of her gift and her visions of a traitor in their midst.

Despite his own vow never to fall in love, Alex can’t get the alluring Lisbeth out of his mind and is driven to protect her when attacks begin on the border. But as her visions of danger intensify, Lisbeth knows it is she who must protect him. Realizing they’ll secure their future only by facing the threat together, she must choose between keeping her magic a secret and losing the man she loves.

Next week Ruth will be on Nicole Locke’s blog with another instalment. 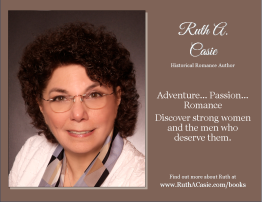 One thought on “first Encounter featuring Ruth A. Casie”

'I was completely immersed in the story and even shed a tear. ' 'A satisfying read, with some great ambiance and a fast-paced romance.' 'Absolutely brilliant story, kept me gripped right til the end and I really cared about the main characters.' 'I couldn't put it down....resulting In a 1.30 a.m. bedtime!'